64 years in the making: Celebrating ‘The Holladay Way’

On June 28, 2016, Holladay Properties (Holladay) and Holladay Construction Group (HCG) gathered with employees from their many offices throughout the U.S. to enjoy a  company-wide team-building event for the first time in Holladay’s 64+ year history. We had nearly 125 people, representing the four regional offices of HCG, all five development offices of Holladay, and several of Holladay’s MOB Management Satellite offices gathered under one roof to celebrate recent achievements, including the completion of the 378,000 square foot Grand Park Events Center, where the event was held.

For those employees who couldn’t be there, for those who were there but may have missed some of his words, and for those of you who just enjoy hearing about the people of Holladay and HCG, we are sharing part of the speech given by John Phair, President & CEO of Holladay and Chairman of HCG, at the celebration event.

“Today was intended to be a Celebration of the completion of this remarkable facility [the Grand Park Events Center] – and an opportunity to try it out with our athletic and game skills! To start off with, let’s take a look at a new video that we will be able to use in all of our offices. Although you will recognize the theme is the completion of this facility, you will see at least a couple other buildings from each office [completed by Holladay and HCG] as well.  So with that intro, let’s take a look…

Holladay stands for something! Yes we can build remarkable facilities. But as important, maybe even more so, we know how to take care of the clients who work in these facilities (you have seen) and over 100 others like the ones you have seen in this video. Management, maintenance, landscaping, correct accounting-those are all things that distinguish us and our management skills. And that means everyone in this room! We are the whole package!

We tell people the truth. We are prideful, without being particularly boastful. We have a client first mentality. We treat each other with respect. Our Golden Rule is to “treat others the way you want to be treated.”

We also ”˜stumble’ and make mistakes occasionally, but hopefully our tag line – building solutions — is the difference maker. We own up to our problems and work to correct them. We get upset, but not mad at each other. We are fixers. We treat each other with respect.

There is a positive story with every individual in this room.  I love you all and I am thankful every day for your support of HP & HCG.” – John Phair

The second purpose of the gathering was to recognize the talented team members at Holladay and HCG. We’d like to share a few of those accomplishments below. 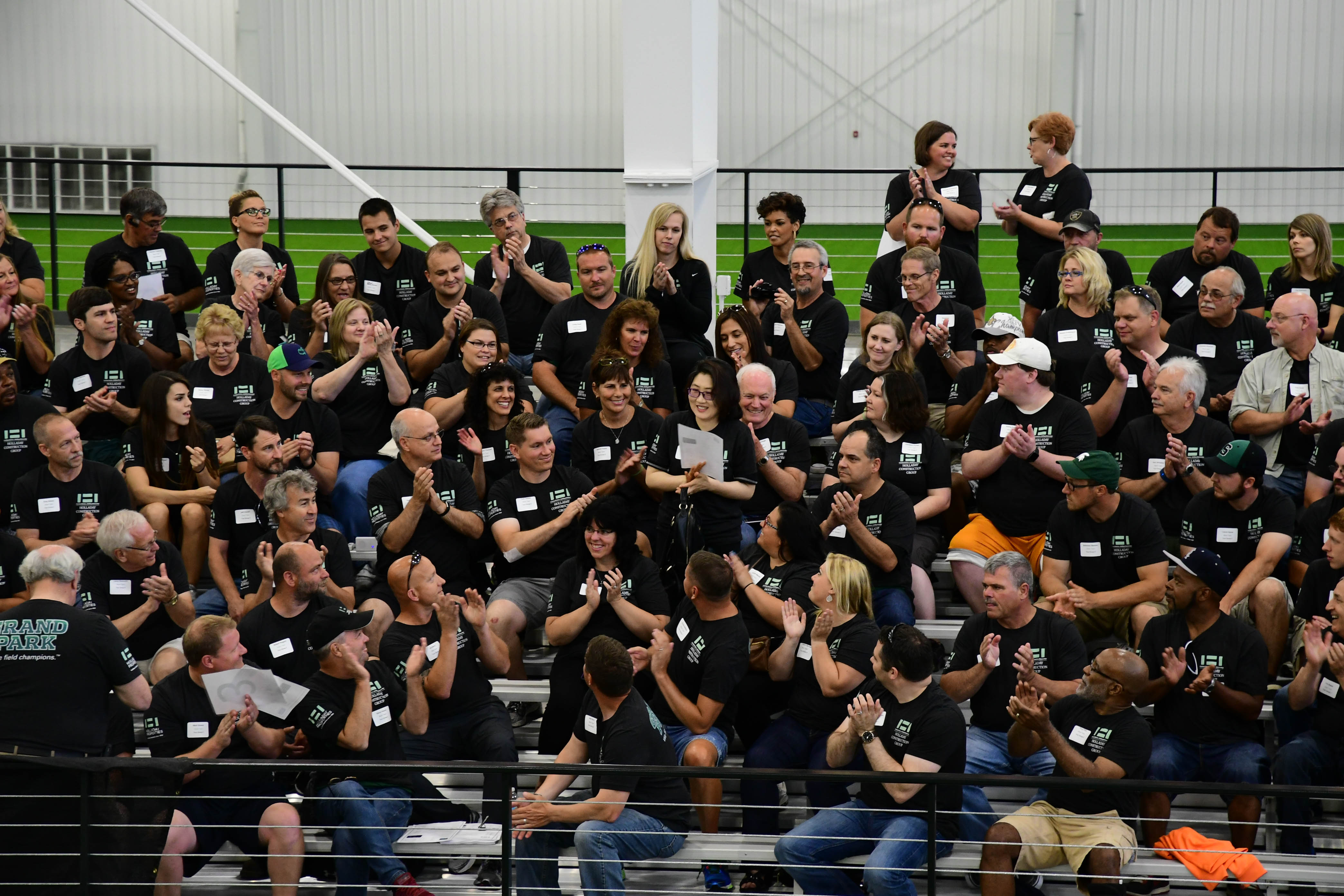 Director of Design Services, Joy Yoo (Indianapolis) is  recognized for her part in the design and development of the Grand Park Events Center. 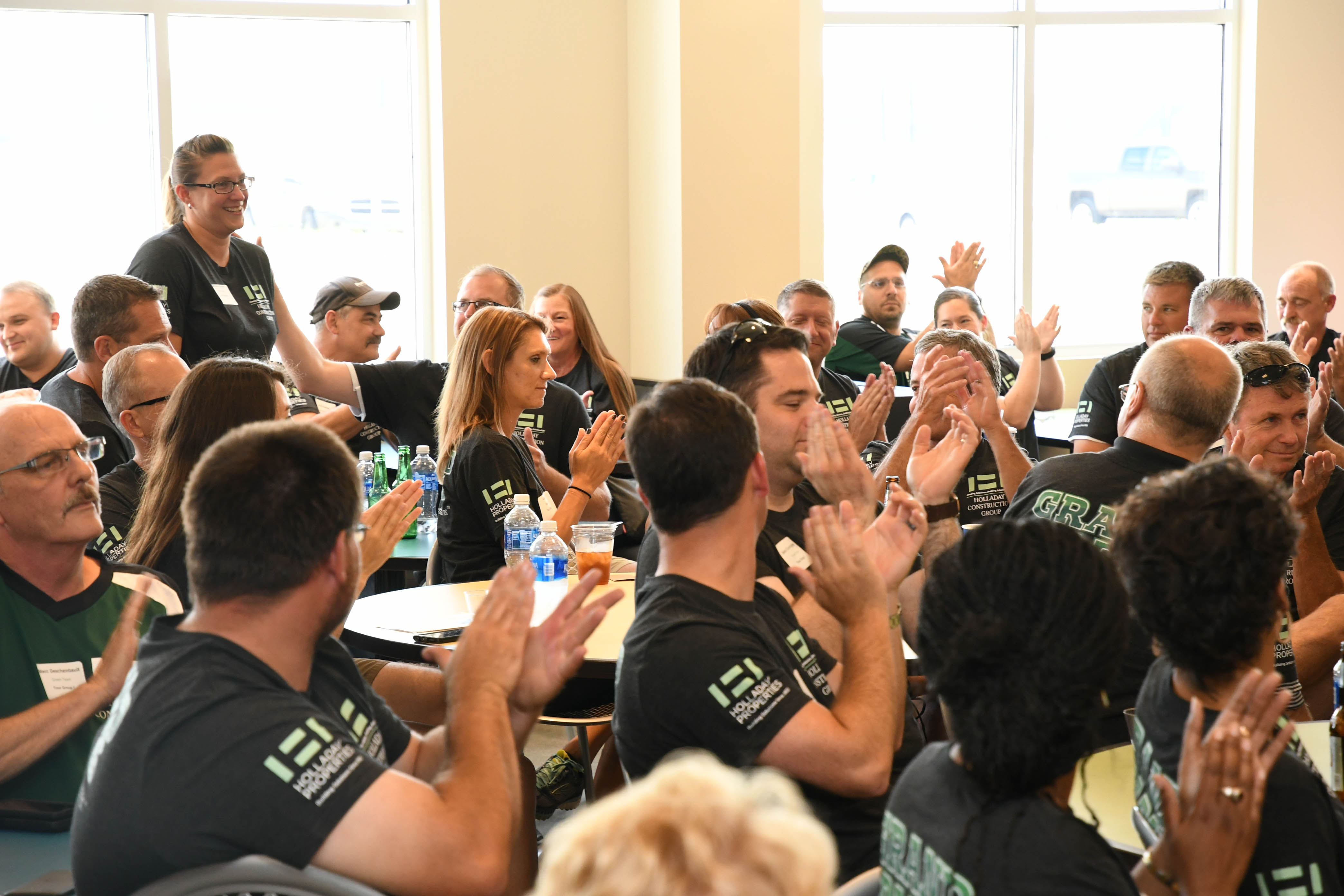 Project Architect, Jessica Vargas (Portage) has been named to the NWI Junior Achievement Board, has been nominated for the 2016 Influential Women of Northwest Indiana Award, and has received her Tennessee architect’s license. 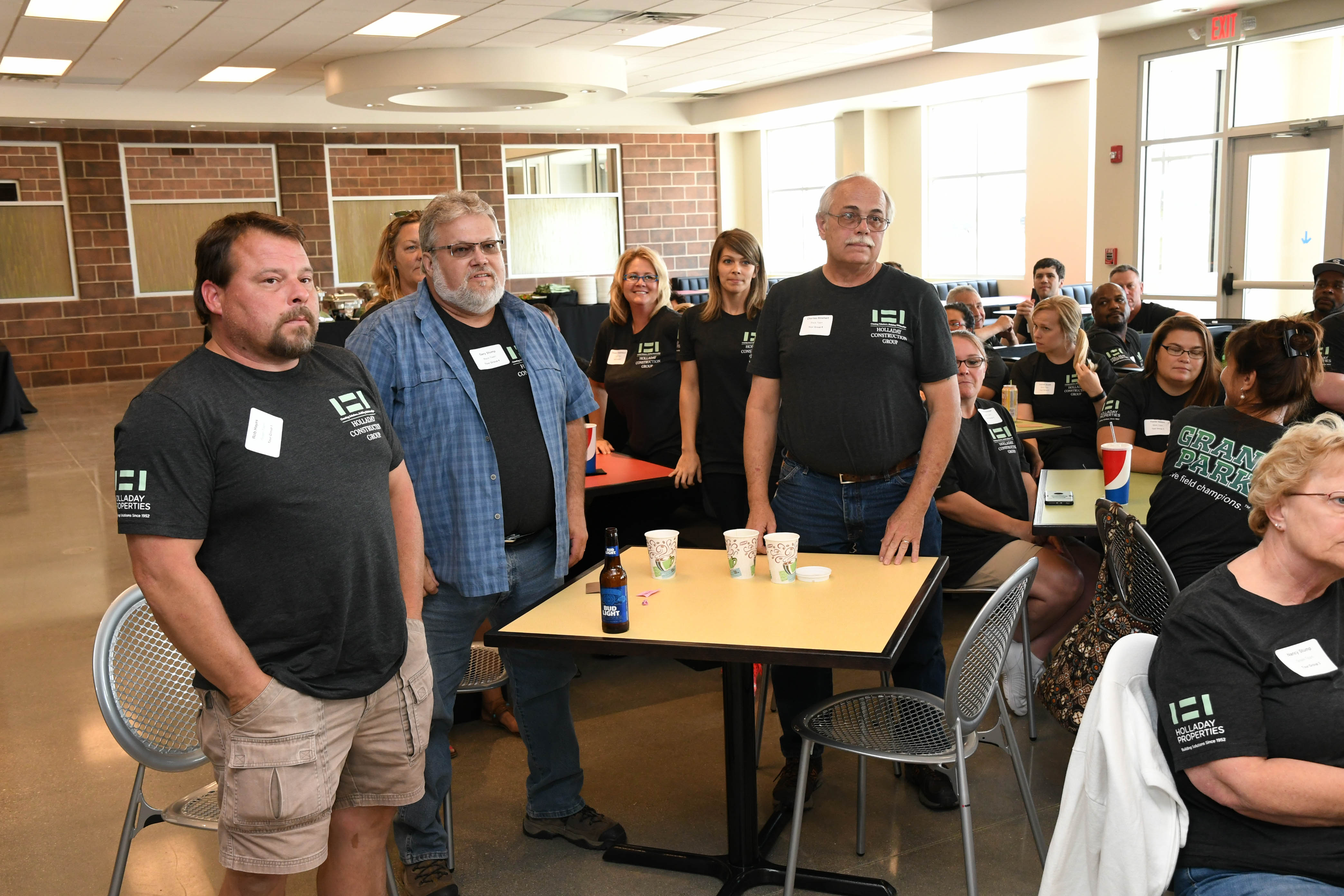 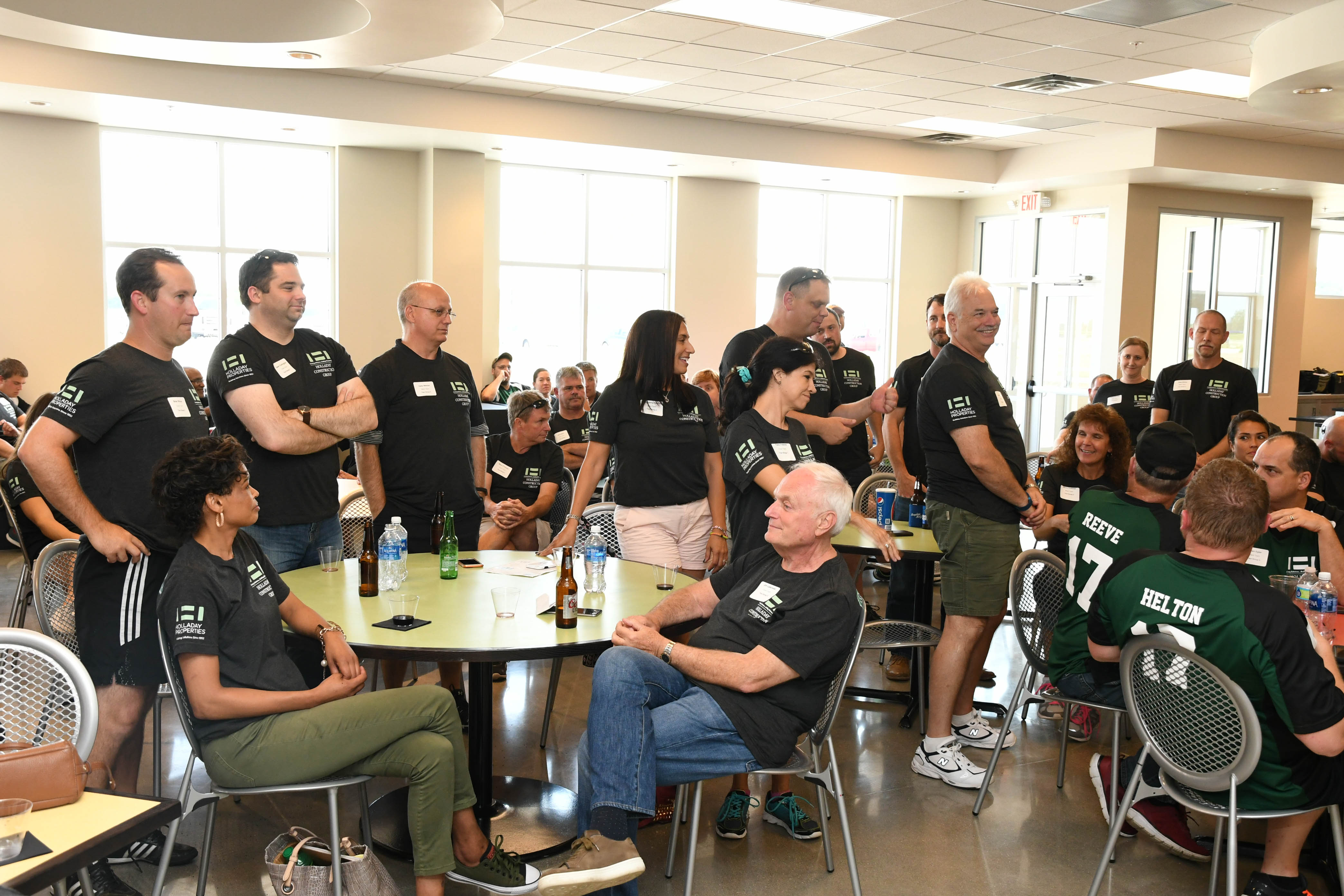 The leadership team from our Nashville office has had an amazing year so far including earning its third BOMA TOBY award, having property manager Jacqueline Fermin named BOMA Property Manager of the Year and elected president of her chapter of BOMA, and receiving several awards from our largest single MOB client, HCP at its annual award ceremony in May. 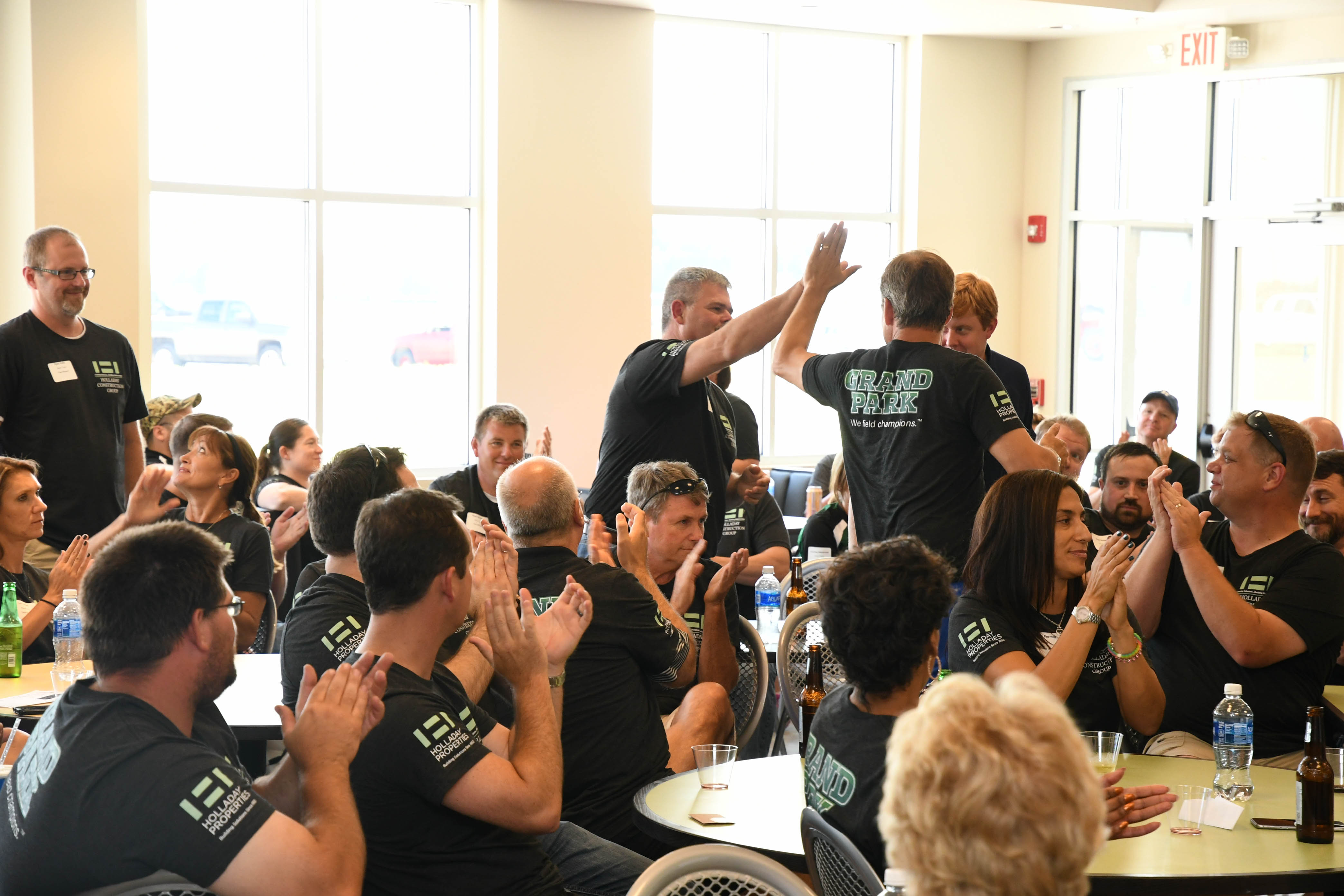 Ryan Kelly, Jeff Arthur, Duffey Phelps and Tim Healy celebrate the opening of the WoodSpring Suites Romeoville, which opened with the highest opening score in company history – of 208 hotels. 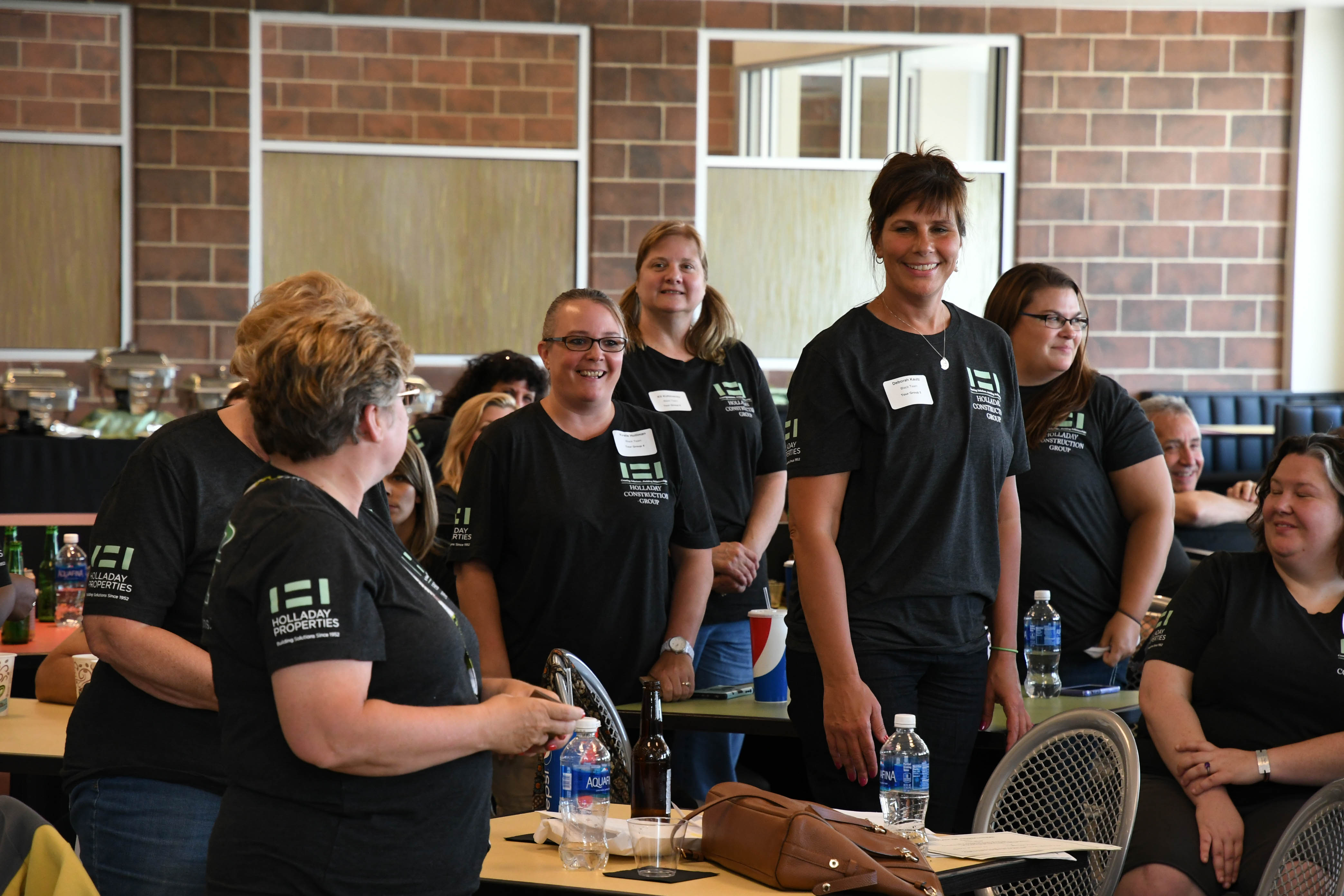 The “unsung” heroes of Holladay & HCG – our accounting team get some recognition for their honesty, integrity and willingness to do the financial work on over 400 seperate locations and nearly 100 partnerships and entities.

The Indianapolis office of HCG and Holladay all had a hand in the completion of the Grand Park Events Center.

Congratulations and thanks to everyone at Holladay and HCG for everything you do and for making this a great company to work for and with each and every day!