“You want to build &*^$?”  In recent memory, this is the response that most industrial developers have received from potential lenders, colleagues, brokers, etc., just prior to an explosion of gut-busting laughter and a reminder for your backside to avoid the door on your way out of the room.

That’s right, since around the 4th Quarter of 2008, speculative or ”˜spec’ construction of industrial space has been the dirty word in industrial real estate.  Something that was so prevalent, almost celebrated in the first ten years of the new millennium, has been categorically absent from all markets for the past three years.  It makes sense, the recession led to the closure or ”˜right-sizing’ of thousands of companies who sought to decrease their expenses by shrinking their real estate footprint through expiration of lease terms, consolidation of space, or bankruptcy.  This led to a glut of (unexpectedly) available industrial space on the market and sent Landlords scrambling to fill the newly found vacancies they had throughout their portfolios by offering free rent, higher TI, lower rates, shorter terms, etc.  It was the epitome of a Tenant’s market, and those who had the cash, and the iron stomach, to invest in their companies’ expansion are sitting very pretty at the current time.

Despite the difficulties the industrial real estate market has faced, spec construction has never been far from the minds of those who truly enjoy the industrial product.  Many people love spec properties for many reasons (even if they won’t willingly admit it!).  Developers love spec because it turns horizontal ground into vertical development, brokers because it is hard to sell something that their prospects cannot actually touch, Economic Development officials because it’s hard to attract outside companies without a place to put them, and Tenants because spec provides available space for them to expand at the exact time their company is ready.

So why the question mark above?  Although backhoes have not been flying out of the Caterpillar factories to start building pads for bulk warehouse facilities, it appears that the stigma attached to spec building is starting to fade.  Absorption of industrial space, nationally, turned positive in the 4th Quarter of 2010 and has been increasing since that time.  Of course, the correlation has been reduced vacancy of industrial space during that same period.  Although the chart below is a national snapshot, this is representative of what we have seen within the Holladay portfolio. 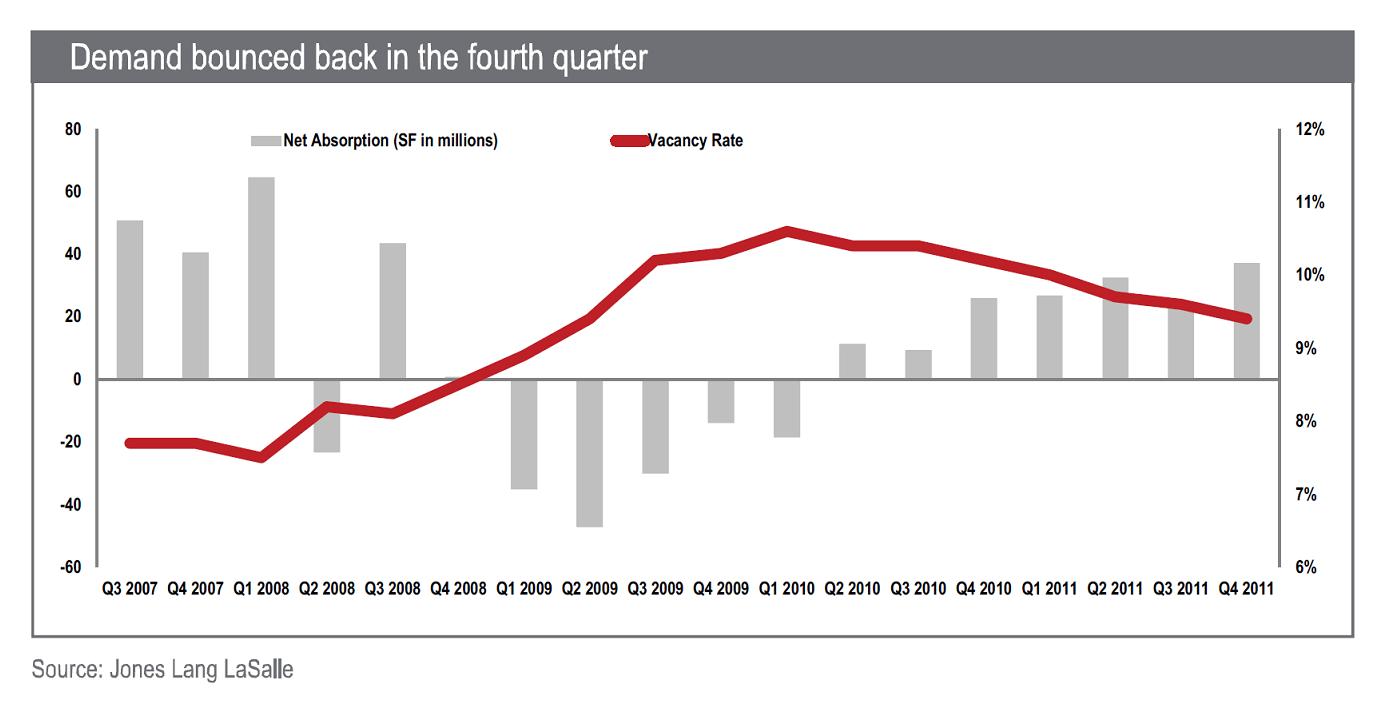 A steady demand from the industrial sector and a shrinking supply of quality industrial space has also started to push rental rates up slowly.  In order to support spec development, the rates need to increase to a level where they will support the cost of new construction, and we are slowly getting there.  As shown in the ”˜Industrial Property Clock’ below, the market appears to have ”˜bottomed out’ but is rising with activity leading on the east and west coasts.

However, the Midwest industrial market should follow closely behind with improvement in rental rates spurring new speculative construction.  CB Richard Ellis states, “New construction is the highest it has been since 2008, with four new projects expected to break ground in 2nd Quarter 2012 for a total of 1.1 million square feet, half of which are speculative projects totaling 730,000 square feet.” (Source: Industrial Market Report — 1st Quarter 2012)  A little closer to home, in Holladay Properties’ development AmeriPlex in Indianapolis, a speculative industrial building of 795,000 square feet was just announced by Industrial Developments International (IDI), which is the first new spec building built in the Indianapolis market since 2008.

With market fundamentals improving and, hopefully, construction activity increasing, the question is when will Holladay throw its hat back in the ring?  Share whatever opinion you would like, but remember for now it is all just speculation!