One could argue that no single development project has had a larger impact on our company than the decision made some 17 years ago to focus on a 1,400 acre parcel of land in the Indianapolis area.  From this parcel of land came Holladay’s first foray into large-scale master planned development.  Not only was the undertaking of this mixed-use development project unlike any other project Holladay had taken on before, but, equally as important, it spawned the “AmeriPlex” brand.

It is also safe to say that a majority of Holladay employees have “touched” the AmeriPlex effort in some way, shape or form in the years that have followed.  Whether in development, design, construction, finance, accounting, marketing, property management, grounds maintenance or facility maintenance, we have all played an important role in creating and maintaining what can today be considered large scale mixed-use development at its absolute best, and a real estate product that Holladay can truly hang its hat on.  With that said, I think it is a worthwhile topic to discuss the past, present and future of AmeriPlex.

In the mid 90’s, Holladay began the master planning process for a 1,400 acre land site in the Indianapolis area.  Led by senior Holladay partner Doug Hunt, the master planning process not only focused on land planning, but also began to focus on the creation of a unique identity for the development.  This early effort is responsible for the creation of the AmeriPlex name/logo and the quality architectural and environmental design standards that each and every AmeriPlex development is known for today.

As to the derivation of the name AmeriPlex, the term “plex” was chosen to represent the multi-use nature of the development and to suggest the sense of an advanced development area.  The term “Ameri” was selected with the idea of promoting/achieving a greater Midwest profile.  The logo element consisted of six linked, spherical shaped nodes, with each node representing one of the six “centers of excellence” that were identified as a targeted use during the master planning process.  The six uses were:

The configuration of the linked nodes took on its circular form upon viewing an aerial photo of the Indianapolis area and observing how the multiple interchanges on the I-465 bypass loop took on the appearance of a molecular form.  This molecular form was embraced with the thought that it would provide the logo, and therefore the development, with a life science/high tech feel and image.

While created specifically for the Indianapolis project, Holladay had the foresight to carry the same name/logo and design guidelines on to future large-scale development efforts.  While it is typical for a business park to create an identity for itself, these are typically “one-off” branding names.  AmeriPlex is truly unique in that it has created a common identity for multiple locations, allowing for cross marketing potential of the land sites and the brand.  The forging of a brand identity has also allowed Holladay to position itself as one of, if not the best, large scale mixed-use land developers in the State of Indiana. 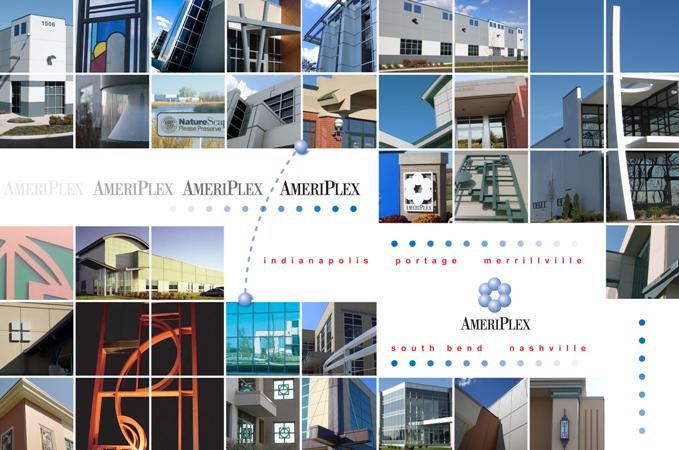 Today, AmeriPlex represents a land area of nearly 2,800 acres (to put that in perspective, this is equivalent to the size of 2,117 football fields — Da Bears!).  From its inception in 1996, AmeriPlex has grown to include a total of five cities: Indianapolis, Portage, Merrillville, South Bend and Nashville, TN.  And while all of these locations share the same core components and ideals established for the flagship development in Indianapolis, each site does incorporate references tailored to the specific region and/or market that it is located in — a sub identity if you will.  These references are sometimes very obvious, as evident in the addition of sub tags to the AmeriPlex name.  For instance, in South Bend, the development is called AmeriPlex at Interstate 80/90, due to its proximity and accessibility to the main interstate serving Northern Indiana.  Other references are a little more obscure (albeit surprisingly recognized and appreciated by users of the parks), such as the adoption of local themes in naming buildings and streets.  For instance, the Portage development has roadways named after historical Chicago architects, land planners and landscape architects and buildings named for Chicago streets in order to (you guessed it) showcase its proximity to the Chicago market.

In addition to the land development activity AmeriPlex has generated, it has also had a fairly profound impact on Holladay as an organization.  Prior to the establishment of AmeriPlex, Holladay operated primarily out of two locations: South Bend, IN and Nashville, TN.  With the addition of the AmeriPlex developments, came the addition of new satellite/regional offices in Indianapolis and Portage.  Today, these offices combine to provide employment to 22 professionals, three of which happen to be current partners and are placed in key leadership roles within the organization.  While initially established to provide direct support in the development and marketing of each specific AmeriPlex site, these “local” offices have allowed Holladay to create a strong presence in additional markets, add to the already impeccable reputation Holladay had long worked hard to establish and capitalize on non-AmeriPlex development opportunities in their respect markets.

When it comes to vertical development, AmeriPlex represents 10 million square feet (and growing) of end user space.  These users consist of warehouse/distribution, manufacturing, office, medical, higher education, retail, recreation and hospitality.  All of this construction activity is in large part how Holladay Construction Group came to exist.  The construction opportunities at AmeriPlex provided HCG with a great foundation from which to grow and excel.  It’s fair to say that these projects were instrumental in allowing HCG to master their craft, build a strong reputation, build a diverse portfolio of building products to market and, just as important, add talented personnel to their staff.  Today Holladay Construction Group employs approximately 12 construction professionals and continues to build on what is already an outstanding reputation in all of their markets, which is evident in the large amount of third party work they earn and the repeat customers they serve.

Other less measurable impacts include the dollars spent in the surrounding communities by the employees at each park (such as housing, fuel, dining, shopping, etc.), increases in community volunteerism/charitable contributions and an increased talent pool for community leadership.  Communities also have a sense of pride in AmeriPlex developments, because they are considered part of the community in which they are located.  This is evident in the many community improvement awards earned over the years and the many tours conducted by local leaders as a means to show visitors a great example of a business park.

Moving forward, we must continue to strive for quality in the maintenance and on-going development of our existing AmeriPlex developments and the planning and design of new developments.  Communities and companies recognize and appreciate these planning and aesthetic qualities.  And more importantly, value is found here.

We must also continue to work hard to promote and showcase each AmeriPlex development.  In essence, we have created an interactive portfolio that highlights our development and construction accomplishments and products; one that business prospects, neighboring community leaders and potential JV land partners can visit and touch/see in person.  We should fully utilize our AmeriPlex base and unique cross marketing advantage as a means to find new development opportunities in all of our markets.  For example, while AmeriPlex Elm Hill is the only AmeriPlex development to accomplish a LEED certified building project, AmeriPlex as a brand (all sites) should be marketing that effort and accomplishment.  Furthermore, if a prospective business were to be considering a site, say at AmeriPlex at the Crossroads, and had a requirement of LEED certification, the Portage development team had sure better be aware of the Elm Hill project and be prepared to discuss and promote the project as if it were their own.  This is simply one of many ways to cross market the AmeriPlex brand.

While the branding of AmeriPlex can be considered forward thinking itself, Holladay should continue to push the envelope when it comes to ways to integrate forward thinking elements into both existing and future AmeriPlex developments.  Sustainable site design and building construction is one such area to focus on.  One could make the argument that most all of the AmeriPlex developments have long incorporated sustainable design elements and construction techniques prior to the “green revolution.”  With that said, we need to increase this effort and punctuate it with the industry designations and certifications that are increasingly recognized by mainstream clientele.  Would it be out of the question for each site to strive for developing, designing and constructing one LEED certified project in the next two years?  Kudos to Nashville for leading this charge!

Renewable energy is a second area worthy of increased focus.  It’s not only important to be educated on solar energy, wind energy and geothermal energy, but there should also be a push to create an initiative that will focus on implementing and showcasing a renewable energy project on each of the sites.  These could begin as simple test projects, such as using solar to power common area irrigation controls or the site lighting of an existing building.  An investment like this might not have been cost efficient back when the majority of projects were developed on a speculative basis and a return on investment was highly unlikely by the building owner.  Those days are long gone and are replaced with build-to-suit clients who are more willing to make that investment, because they will be the direct beneficiary in the form of utility cost savings.  Besides being able to talk the talk, what better way to sell our expertise, than to be able to illustrate real on-site case studies to a prospective client.  A final and ongoing area of focus would be in communications infrastructure.  AmeriPlex developments should always strive to contain the best communications offerings for existing and future users.

In closing, I would like to share a quote from American Architect and Urban Planner, Daniel Burnham; “Make no little plan, they have no magic to stir men’s blood and probably themselves will not be realized.  Make big plans; aim high in hope and work, remembering that a noble, logical diagram once recorded will not die.”  The creation of AmeriPlex is definitely Holladay’s very own “big plan.”  A plan that has required, and provided, great amounts of work.  A plan that has helped provide direction in the quality of product with which Holladay is associated.  A plan that will continue on long after any individual.