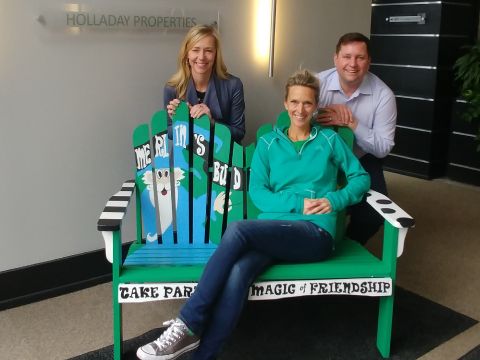 (South Bend, IN) – The South Bend office of Holladay Properties has been a big supporter of the St. Joseph County Boys & Girls Club for years. In the past, we’ve had Manette Tepe, Paul Phair, and, most recently, John Phair participate in the annual Greatest Kids Event, which is also being held at the Prince William Boys and Girls Club this year (see Richmond below). While we don’t have an active employee participating in the program, we are a sponsor and we’re excited to support Kelly Bellinger and Team Green. Kelly, the widow of former Holladay employee Merlin J. Bellinger, has thrown herself into this event with abandon and we are proud to support her efforts. Kelly also created The GREEN Bench, a special edition of Kelly’s “Merlin Buddy Bench” which is designed to share the magic of friendship and the Magic of the Club.