The 1% that goes to swing voters in swing states

We are less than 100 days to the upcoming election. From my previous post, it is evident that I like numbers”¦ If you watch any election coverage, the ability to synthesize and process large volumes of data to identify key voters — even to the census level within a county — is incredible. As real estate professionals, we also have access to and use similar demographic information, but we use the data to, hopefully, give us insight into the success of a particular project in a given area. This detailed data has changed real estate and is also changing our political processes. There are many maps now showing which states are locks for the Democrats, Republicans and Toss-Ups.

Many political observers are estimating that between $6 – $8 BILLION dollars will be spent in this year’s election. The entire Nashville Office market is about 32 million square feet. With $6 billion, one could buy the entire market for $187.50 per square foot. Surprisingly, on average, I suspect this is not too far off from the true value of all of these buildings.

So, where is the $6,000,000,000 going? Not to worry, this is not the 1.0% that has received so much media coverage, this is a different 1.0% that is being targeted with a lot of money and attention. It is going to the SVSS — Swing Voters in Swing States. Currently, the “consensus” toss-up states are: Florida, Ohio, Virginia, Wisconsin, Colorado, Iowa, Nevada, and New Hampshire. Most observers believe these states will be won by less than 5%. The reality is that a vast majority in these states have already decided who they will vote for, leaving this +/-5% Undecided as the true Swing Voters within Swing States. Looking at the 2008 election and the number of voters in these states, reveals a significant amount of money and the 1.0%: 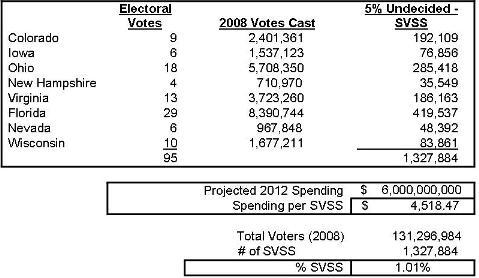 I actually thought the spending per voter would be higher for this select group, but that is a lot of attention for this 1.0%.

The Braves are on track to win 92 games this year indicating 2013 GDP of 2.34%. However, they made a few trade deadline acquisitions that I believe are worth another 5 or so victories, so the 100 wins and 3.0% for 2013 are still within reach!