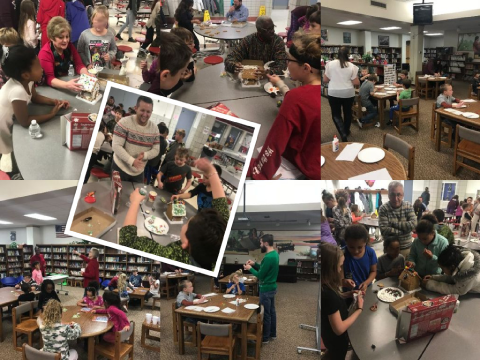 Holladay Properties’ South Bend office hosted the annual Boys & Girls Club of St. Joseph County Christmas Party on Wednesday, December 12 at LaSalle Elementary in Mishawaka, IN. Holladay had a total of 17 volunteers who teamed up with with about seven Boys & Girls Club staff members. The party began with Paul Phair leading a trivia contest to see which tables could get their pizza first and our volunteers also sang a few Christmas carols before and after the children ate. After pizza, the older kids built and decorated gingerbread houses. We put together eight groups of between 4-6 kids with a Holladay team member leading and encouraging them, but not doing the project for them. While the older kids build their houses, the younger kids played BINGO and made snowmen out of clothespins. Then, after all the crafts, the kids played games in the gym including pin the nose on Rudolph and Frosty, life size checkers, bowling and basketball.